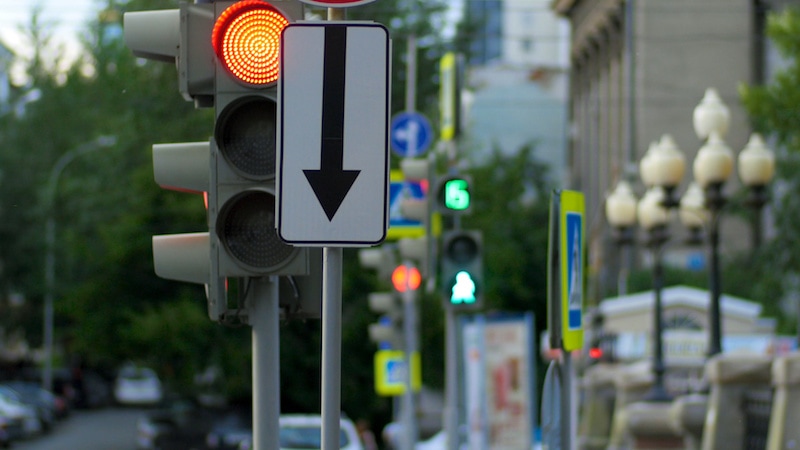 An intersection is any place where a road meets another road and traffic converges from different directions. More than half of the combined fatality and injury car accidents happen at intersections.

Crashes at intersections may be particularly fast, if drivers are completely disregarding the traffic control devices or if they are trying to beat a traffic light and get through before the light changes. Unfortunately, many people who race a traffic light are already too late to make it through the intersection while it is their turn.

There are many combinations of road intersections. The most common is a two-way street meeting another two-way street with the lines of the roads meeting in a perpendicular fashion. There are also various combinations where two roads meet and one or both of the roads are one-way. In that case, traffic should only be coming from one direction but that may confuse the other drivers.

Another kind of road intersection is one where the road ends at the intersection and the driver has to turn left or right. This is sometimes called a T junction or a Y junction, depending on the shape. Some rare kinds of intersections involve the intersection of 3, 4, or even more roads at one location.

Even a simple intersection can cause confusion as drivers will need to search for signs and other indicators to let them know how to proceed. The addition of one-way streets causes even more confusion.

Traffic intersections often have a traffic light or stop sign which lets vehicles know whose turn it is to proceed. Roundabouts are in place in several locations allowing drivers to proceed after yielding to traffic already in the intersection.

Why Car Crashes Happen in Intersections

According to the National Highway Traffic Safety Administration (NHTSA), “Crashes often occur at intersections because these are the locations where two or more roads cross each other and activities such as turning left, crossing over, and turning right have the potential for conflicts resulting in crashes.” When drivers need to make a choice about whose turn it is, they often make an incorrect choice thinking they have the right-of-way when they don’t.

Other drivers are simply in a hurry and proceed through the intersection knowing they don’t have the right-of-way, hoping the other drivers stop for them. Yet other drivers simply aren’t paying attention and don’t see the red light or the stop sign.

Intersections are responsible for many serious car accidents in Texas, where 812 people were killed in traffic accidents which occurred in intersections in 2015, out of a total of 3,578 fatal accidents for the year. In 2016, the number of fatal crashes in intersections was 814 out of 3,773.

Also in 2015, 22,500 accidents were caused by drivers who disregarded a stop and go signal, with 85 of those accidents resulting in fatalities. In 2016, failure to obey a stop sign or light caused 11,283 crashes, with 80 of them being fatal.

Drivers are required to pass a driving test to obtain a driver’s license, but many people still seem confused about who has the right of way at an intersection. It is important to know whose turn it is in order to avoid colliding with the other drivers.

When there are no traffic control devices, the person on the right has priority. Stop signs require drivers to not just come to a complete stop, but to then wait until the intersection is clear before proceeding. Yield signs require the driver to yield to other traffic, while traffic lights signal by color who can go. Many localities allow drivers to turn right on red but only after coming to a complete stop and waiting until the way is clear.

Violating any of those rules may be just a mistake but it is a mistake that makes that driver liable for any damages caused by any resulting accident. Traffic rules make it easier to assign blame but also allow innocent people a way to argue and prove their case.

Finding a Law Firm after an Intersection Accident

If you have been injured because of an accident that occurred at an intersection, you may have serious injuries and substantial property damage. If you had the right of way and the other driver caused the accident by violating a traffic rule, you may be able to recover your damages, including rental cars, medical bills, and pain and suffering.

The Dashner Law Firm has attorneys who want to help you recover and receive the compensation you deserve. You can call today and get a free consultation on your case.