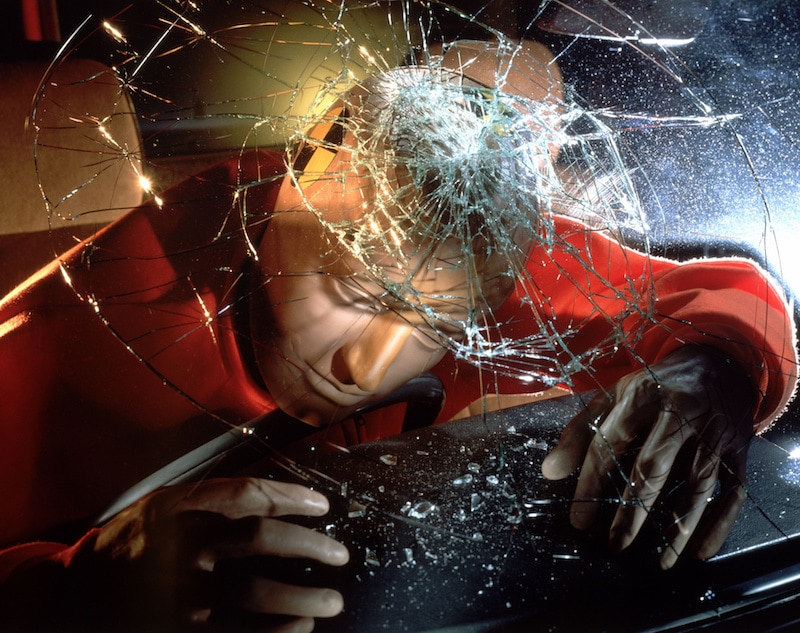 In a head-on collision, the front end of any two vehicles, such as cars, boats or other vehicles, hit with their front ends while they are going toward each other. Because they are both moving at higher speeds, the force of both vehicles is multiplied, resulting in a very hard collision. A common example is a train wreck, where the signals get crossed and the two trains on the same line meet violently.

Even though they don’t make a large number of total collisions, only being about 2 percent of overall car accident collisions, head-on collisions make up a disproportionate number of fatalities. Because the vehicles meet with such great force at what might be high speed, the crash is incredibly violent and could cause the immediate death of the drivers and passengers involved.

Like sideswipe accidents, head-on collisions normally occur because the operators could not stay in their lane and no physical dividers exist. The number of fatalities from head-on collisions reduced dramatically when barriers were put in between lanes. Barriers include concrete or cable barriers, which give the driver a physical reminder to not cross over.

Some other head-on collisions happen when drivers enter the freeway on the wrong ramp, which causes them to start driving into oncoming traffic. Designers attempt to prevent this with markings and signs to make it clear which exit is needed. Head-on collisions are more prevalent in a rural area where there is less traffic and the roads are often not as well marked.

Every year the Texas Department of Transportation collects statistics on crashes and publishes a Crash Sheet. The fatality rate in Texas is increasing, with the overall rate being 1.44 deaths per hundred vehicle miles traveled. A reportable crash occurred every 57 seconds in 2016, with a fatal crash occurring every two hours and 20 minutes. Even pedestrian fatalities went up 21.5 percent, to reach 678.

As with injuries from being rear-ended, a common injury in a head-on collision is whiplash. Because the head and neck continue to move after the cars hit and stop moving, the head then “whips” back, which causes a great strain on the ligaments and muscles in the neck, shoulders, and back. Victims of whiplash may experience pain, headaches, stiffness, and dizziness. They should see a doctor immediately so that they can start the recovery process.

Other injuries include abdominal or spinal injuries caused by the impact of the crash. When the head is thrown forward, it may strike something, resulting in a concussion. The victim could end up with brain damage.

If the force of the crash is excessive enough, the seatbelt or airbag may injure the chest, face, or even break some ribs.

The feet and legs could take much of the impact because they are in the front where the collision is. This could result in broken bones or torn ligaments.

Because head-on collisions are traumatic, they can result in great personal injury, leading to large settlements for the victims. A victim in Kansas was involved in a head-on collision, and she did not believe she was injured at the time. However, she started experiencing symptoms which caused her to seek medical treatment, and it turned out that she had a concussion. The settlement she received was for $70,000.

A Texas woman was hit head-on by a truck, causing her to suffer several broken bones and a permanently injured arm. She was a wife and mother of two who had been working in the mortgage industry, and she negotiated a settlement that would ensure her future. She eventually agreed to accept $2,000,000.

A young man in California was hit head-on by an underinsured motorist, causing him to suffer a fracture and soft tissue swelling. He accepted the maximum from the underinsured motorist, which was $50,000, and tried to recover the rest from his own insurance company. His insurance company disputed the injuries, so he brought suit against him. The jury awarded him $300,000 for pain and suffering and another $4,000,000 in punitive damages.

A young male in New Jersey suffered several injuries when the vehicle he was riding in was hit head-on. He tried to collect from the insurance company, but they denied his claim because they said it was his fault because he wasn’t wearing his seatbelt. He filed suit and the jury awarded him $250,000, which the judge reduced by 70 percent to apportion his fault in his injuries.